Health care in BC has just celebrated a unique milestone! October 1st marked the two-year anniversary of the transfer of health services from Health Canada to the First Nations Health Authority (FNHA).

The First Nations Health Authority is unique in the country! It represents many years of dedicated work and collaboration between multiple governments and communities. The process began in 2005 with an agreement for multiple levels of government to work together to improve the health inequities experienced by First Nations people in the province. The transfer of programs and services to the First Nations Health Authority heralded a future of change and ongoing partnerships.

An FNHA Transfer anniversary event was hosted with Change Day BC at downtown Vancouver FNHA offices on October 1, 2015. The event included words from FNHA senior leadership, joined by Squamish Nation Chief Ian Campbell and representatives from Change Day BC.

Learn more about how the First Nations Health Authority marked the two-year anniversary.

For example, Project Advisory Committees (PACs) that include representatives from Northern First Nations, FNHA and NH are working together to plan the delivery of Mobile Support Teams (MSTs) across the North that will bring increased access to Mental Health and Primary Care in First Nations communities. Four PACs are overseeing Phase 1 of the MST initiative centred in the following locations: Fort St. John, Quesnel, Dease Lake and Prince Rupert. Phase 2 of the initiative is planned to begin in early 2016 and will include additional locations. This is an exciting partnership initiative for permanent, community-developed and supported service improvements. 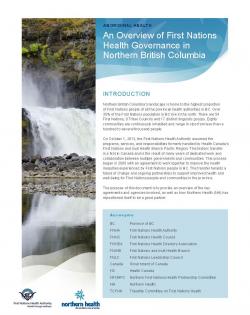 An Overview of First Nations Health Governance in Northern...