June 21 is National Indigenous Peoples Day! This is a time for all Canadians – Indigenous, non-Indigenous, and newcomers – to reflect on and celebrate the history, heritage, and diversity of First Nations, Inuit, and Métis Peoples in Canada.

First Nations, Inuit, and Métis peoples share many similarities, but they each have their own distinct heritage, language, cultural practices, and spiritual beliefs.

What led to the creation of National Indigenous Peoples Day?

In 1996, then-Governor General, Roméo LeBlanc, declared June 21 of each year as National Aboriginal Day. The proclamation was the result of consultations and statements of support by various Indigenous groups:

Prince George Drum Circle – A drum circle is taking place at Lheidli T’enneh Memorial Park to celebrate Indigenous Peoples Day on June 21. Hosted by the UHNBC Drum Group, the event is open to everyone. The UHNBC Drum Group has performed every Monday night throughout the pandemic to help lift the spirits of health care workers at the hospital. The event starts at 11:00 am and runs until 3:00 pm.

2021 Indigenous Voices Awards (IVA) Virtual Celebration – To celebrate Indigenous Peoples Day IVA is hosting a virtual celebration featuring a live stream of readings and stories from the 2021 IVAs finalists. Hosted by Tenille Campbell, the event will also announce this year’s award recipients. The event begins at 5:00 PM on June 21.

Summer Solstice Indigenous Festival – This free online event is hosted by the National Association of Friendship Centres. The festival helps all people in Canada recognize the enormous contributions that Inuit, First Nations, and Métis peoples have made to Canada.

Honouring Wellness – This virtual workshop takes place on Tuesday, June 22, 2021. The workshop is a guided exploration of Indigenous approaches to health and wellness from across the province.

In May we learned of the tragic discovery at the former Kamloops Indian Residential School which was built on the traditional territory of the Tk’emlúps te Secwépemc First Nation, where the remains of 215 children have been found buried at the site. On behalf of the Northern Health board, and staff and physicians, we offer sincere condolences to families and communities mourning the immeasurable loss of so many young lives.

We reaffirm our commitment to a future that is free of discrimination and racism. Northern Health continues to lower the flags at its facilities across the region to honour the lives of the 215 children; and today we invite you to pause and observe a moment of silence at 2:15 pm. We recognize some physicians and care providers may not be able to observe a moment at that time. To those front line care providers, we encourage you to reflect at a time that does not conflict with the care you may be providing. For those wishing to reflect further throughout the day, we have prepared material that provides information about supporting educational and cultural resources.

We acknowledge the significant impact that the trauma experienced in residential schools continues to have on generations of survivors and their families. Northern Health remains committed to working with the First Nations Health Authority, Métis Nation BC, and Indigenous leaders across the North on meaningful change that honours diversity and provides culturally safe services. 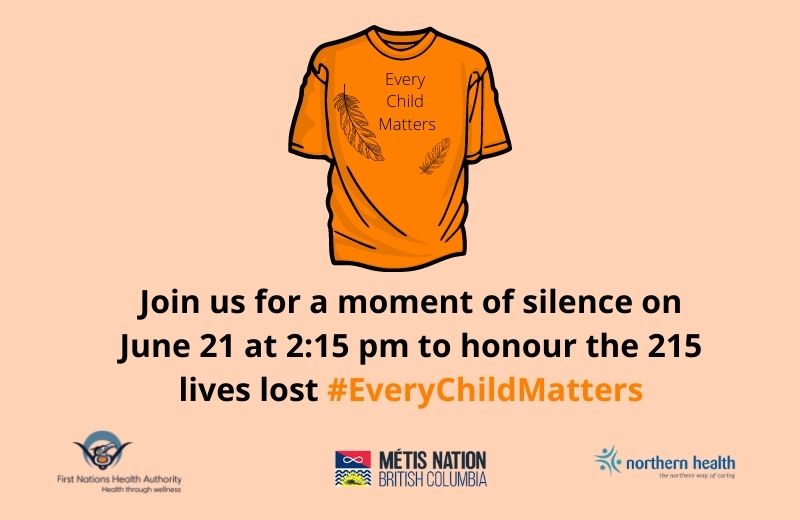 Support is available for anyone affected by their experience at residential schools.